Your cart is currently empty
You are here: Home 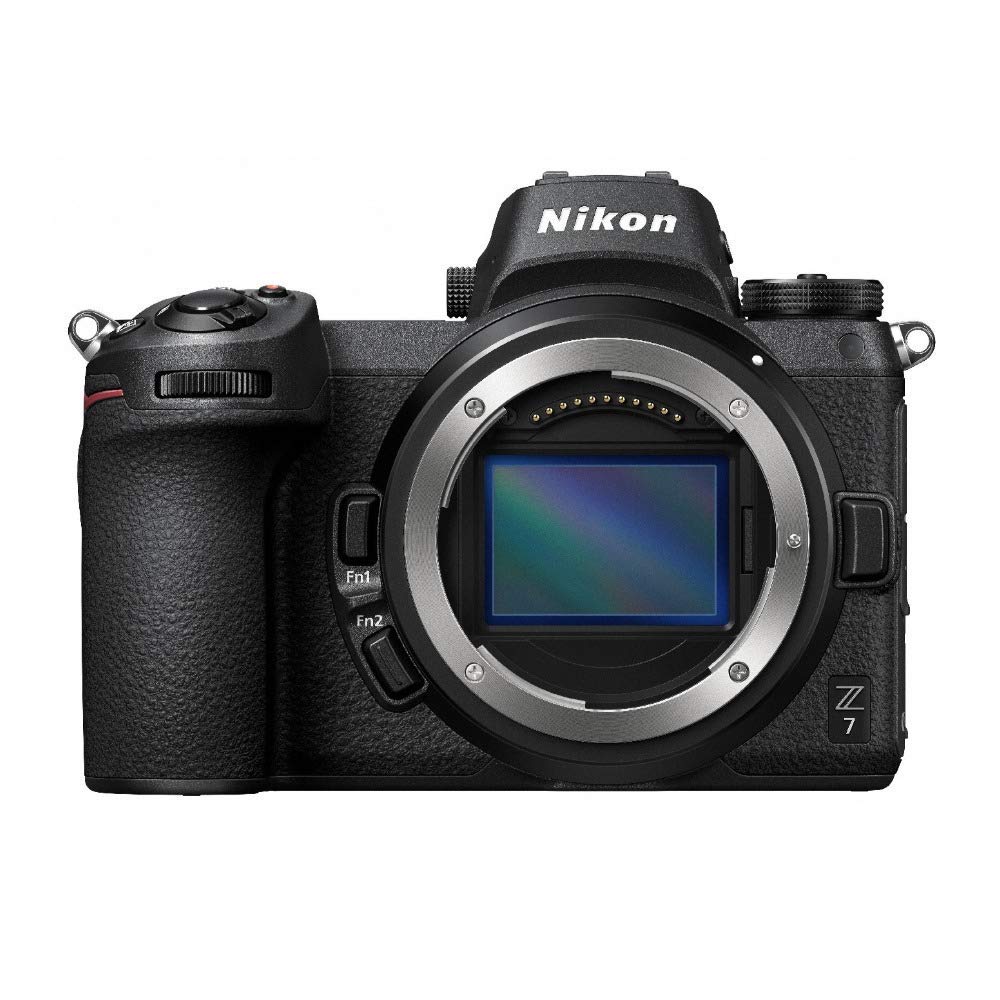 You can see this camera in our online store by clicking here.

PDAF is a method of focus where a pair of pixels see 1/2 (or less) light than an imaging pixel.  Actually, that's not entirely accurate because the Canon EOS R has PDAF where the PDAF pixels are also imaging pixels.  There are a number of different PDAF methods but three commons ones are a half metal shield under the Color Filter Array (CFA), a football shaped microlens that covers two pixels above the CFA and small PDAF pixels next to larger image sensor pixels.  With PDAF the two pixel pair compares the out-of-phase ligth and then figures out how much focus should change to get the pixels in-phase.  Curiously, I see some PDAF cameras work fine after monochrome conversion and some PDAF cameras have focus issues.  If there is a knowledgeable person who knows more than I, feel free to contact and educate me.

CDAF is a method of focus where the camera hunts for the optimum contrast.  That's the way the camcorders of yore found focus (Remember them?  Almost everyone has switched to using their phone, iPad or digital camera for video).

So why would one want PDAF or CDAF?  PDAF is fast and best suited for focusing on something moving fast - think trying to take a sports photo of someone running down the field.  One drawback of PDAF is that for most sensor configurations, the PDAF pattern on the camera can become evident in the picture under certain conditions where you can see banding or lines running through the picture.

CDAF takes longer to focus, but still typically less than a second.  But here is a fact the camera manufacturers gloss over: CDAF focus is better than PDAF.  PDAF gets you close but not all the way there.  If you want to get the sports action picture, PDAF is the way to go because CDAF may be too slow, but for everything else, CDAF is superior.

So getting back to the Z7, with the camera in Auto Focus Continuous (AF-C) mode, auto focus was hit and miss.  But in Auto Focus Single (AF-S), the camera focused fine.  That's interesting.  The manual says AF-S and AF-C both used PDAF except for pinpoint AF in AF-S mode where it uses only CDAF.  But if that were true though, AF-S focus wouldn't work either.  After some sleuthing, I figured out that for the Z7, in AF-S mode, the camera first uses PDAF to get focus close, and then it switches to CDAF to get a focus 'trim' where it adjusts focus better.  In AF-S, the camera knows you are only taking one picture so it has more time to find optimum focus.

Why wouldn't Nikon tell us this in the manual?  I suspect that Nikon doesn't want to admit that PDAF focus is not as good as CDAF, or that AF-C focus is not as good as AF-S.  If users started testing AF-C and AF-S focusing and realized that AF-C wasn't working as well, they might get complaints.  But the real world is-what-it-is.  So for optimum focus, use CDAF if possible or manual focus preferably with focus peaking turned on.  Unfortunately, the manufacturers are often less  than forthcoming about how the mirrorless cameras are finding focus.

Note that this is mainly a problem for mirrorless cameras that use PDAF.  DSLR cameras focus through a separate AF sensor rather than the image sensor itself.

For the Nikon Z7 monochrome camera, the solution is to shoot in AF-S or rack focus manually.  If you are trying to get the best possible monochrome picture, you don't want to use AF-C anyhow, so not much of a loss really.

Now lets see some comparisons with a stock Z7 and monochrome Z7.  Both cameras where set to the same ISO, same aperture in Aperture Priority mode with the same lens.  Shutter speed for the monochrome was about twice because the monochrome camera is more sensitive to light than the stock camera.  You can download RAW file examples from our website. 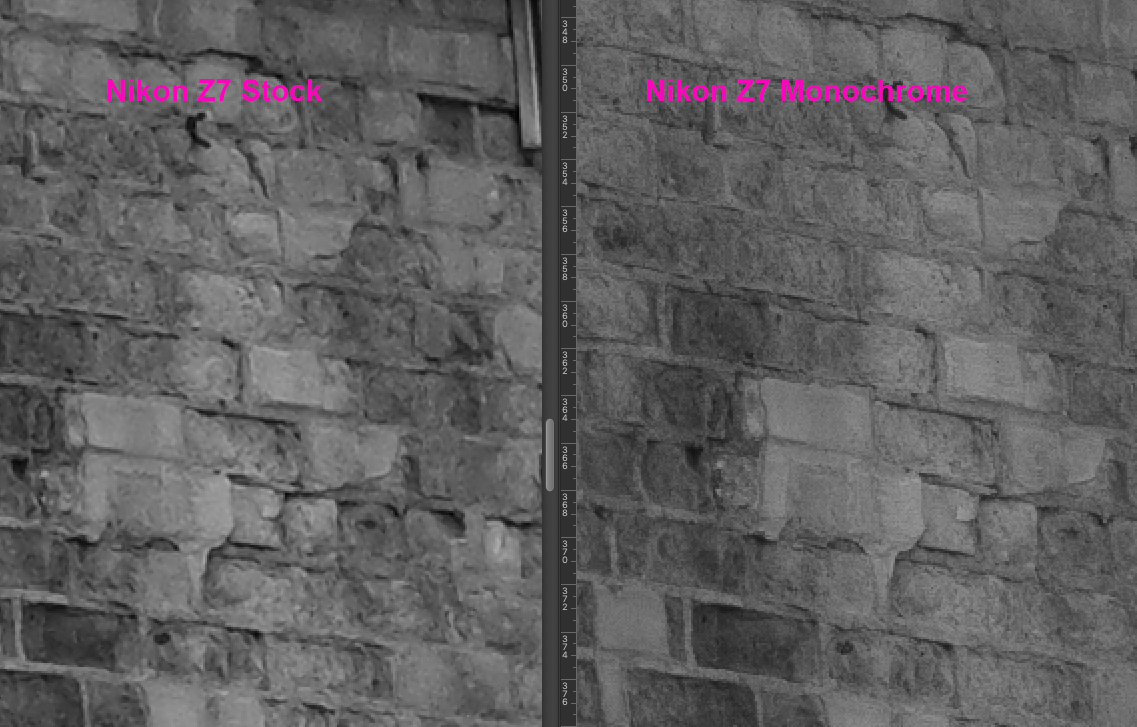 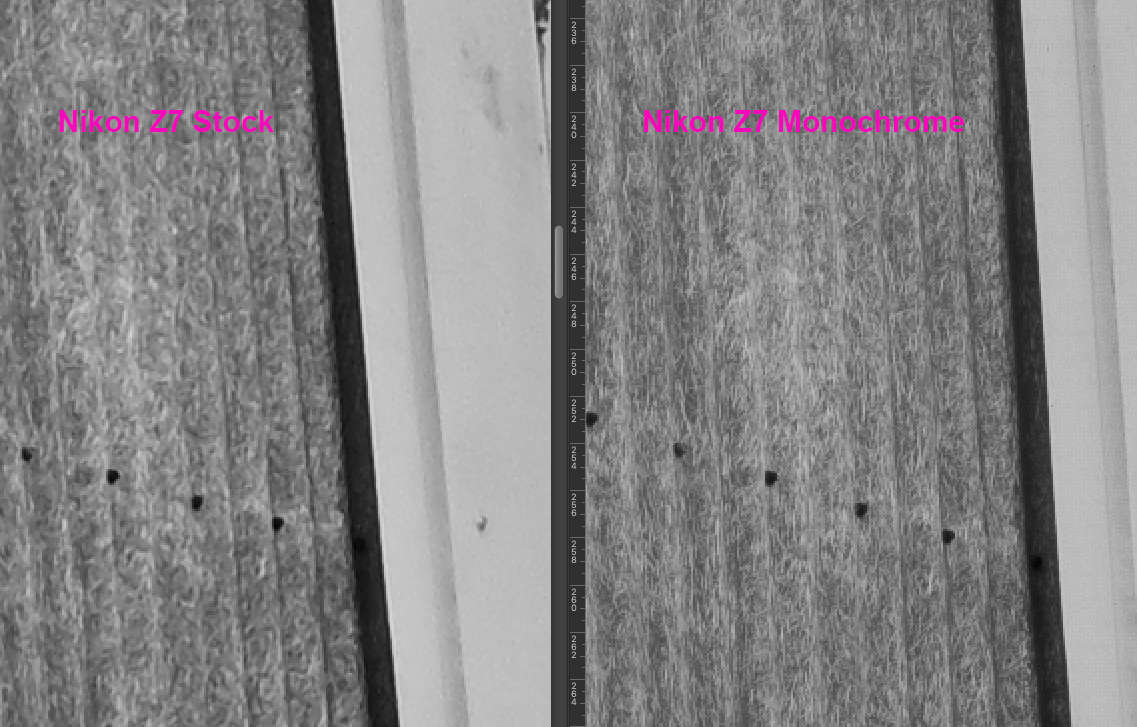 Note: For processing, we prefer shooting in RAW, using Monochrome2DNG for the RAW conversion and then using picture editor of choice.