CCD and CMOS image sensors only see black and white.  In order for the camera to see color, small color filters are printed on top of the image sensors.  These filters are typically arranged in a Bayer pattern also known as the Color Filter Array (CFA).

Below is the typical response curve for CCD and CMOS image sensors that we found from a image sensor manufacturer.  The top dark blue channel shows the quantum efficiency of an unfiltered image sensor.  The Red, Green and Blue traces show the transmission response after the light passes through the mosaic color filter over the image sensors.

When we convert a camera to see IR+Visible or IR-Only, the majority of the infrared data will come in on the red channel.  Interestingly, the blue and green channels will see some infrared but will be much lower than the red channel.

Below is a graph of a Nikon D700 spectral response curve that we measured with our Ocean Optics spectrometer, monochromator and calibrated light source.  This measured curve is a bit different than the sensor manufacturer curve which may be due to other processing that occurs in the camera after you take a picture.  The measured curve below is what you can expect from a typical digital SLR camera 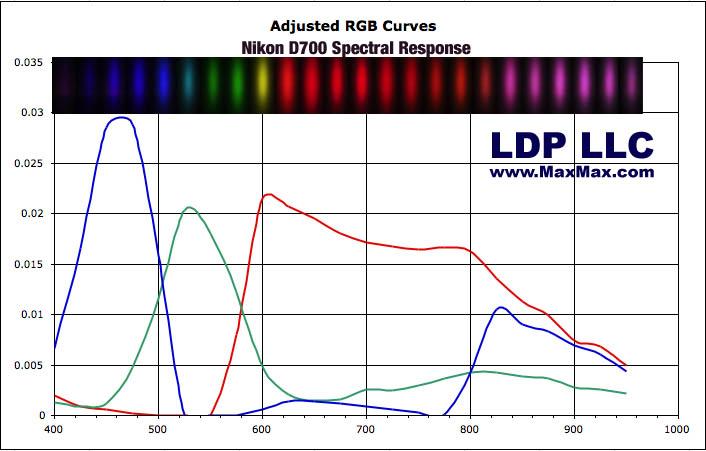