A study on the Nikon D200HR enhancement versus a stock D200

We have done a number of tests comparing a stock Nikon D200 with our Nikon D200HR. The Nikon D200HR has a custom piece of an IR Cut Filter (ICF) that replaces the stock cameras Anti-Aliasing (AA) and ICF assembly. On a stock camera, the ICF and AA are cemented together; therefore, when the AA is removed the stock ICF must also be removed.

As mentioned on other pages, the AA filter is also known as the Blur Filter. Camera makers use an AA filter to reduce or eliminate potential moiré problems; the cost of reducing or eliminating moiré is a loss of camera resolution as well as contrast and color depth.

At first we thought the HR enhancement only affected resolution, but we have also learned that the camera's contrast and color depth are also improved on an HR model. The reason color and contrast improve is that the blur filter effectively averages out a number of pixels together. So, if you have some white and some black pixels near the sensor limit, a stock camera will see grey while an HR color will see blacks and whites. On the pictures shown below, this will become clear.

Using a stock D200 and one D200HR, we used the same lens, lighting and tripod to take a series of pictures. We let the camera use its auto focus and then bracketed the focus slightly to make sure we were not getting confused by the possibility of one camera having a slightly better auto focus. We analyzed the pictures in Photoshop and picked the sharpest pictures from both. We have not done any sharpening or other processing. These are samples from the RAW files converted to JPG's for the web.

Scene 1: Test patterns and other subjects: In Scene 1, we used an original Kodak resolution chart, Gretagmacbeth ColorChecker chart, and various other objects designed to show any differences between the cameras. The resolution chart clearly shows the moiré problems that can occur with an HR camera.

Scene 2: Real world picture. While test patterns and resolution charts are helpful in understanding what a camera can achieve, they also can be misleading in real world situations. The reason is that, unless you take pictures of test charts, the only performance you should care about is the performance you get from the camera when you take real pictures. We think that perhaps the camera manufacturer engineers have become too focused on achieve certain technical goals (like reducing moiré) but have not thought enough about the sacrifice they make.

Here is the overall scene with the test targets and various objects. The HR model is on the left and the stock camera is on the right.

Pixels at 100% on resolution. Notice that the HR models clearly shows some banding and color moiré problems. However, even the stock camera also has some moiré problems. Also, notice the difference in sharpness.

Another resolution chart showing how the HR model is sharper but has a worse moiré problem.

Notice the sharpness of the hairs on the stainless steel braided cable and the crispness of the writing on the $20 bill.

Look at the difference between the blacks and the subtle details on the bottle which you can see on the left HR and not on the stock D200 on the right. Which one looks like a bottle and which looks like a picture of a bottle? Which has greater color depth and 3-dimensionality?

Note to all those who want to test camera resolution and not buy the expensive charts for hundreds of dollars: Use a crisp piece of currency. This $20 bill shown below is a great resolution test.

To help you understand what the HR and stock camera are doing, we first will show you the picture at 100% resolution and then zoom into the left eye of Andrew Jackson so you can see what is happening at a pixel level. 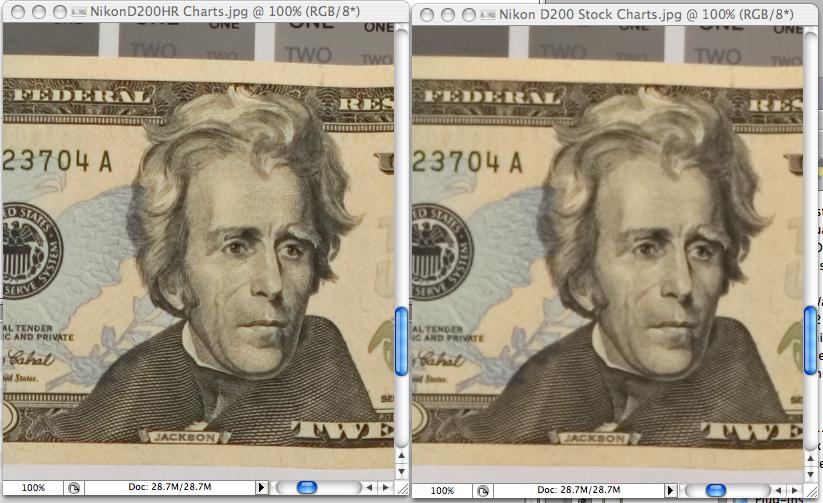 500% zoom. Notice how the HR model shows much, much more detail. 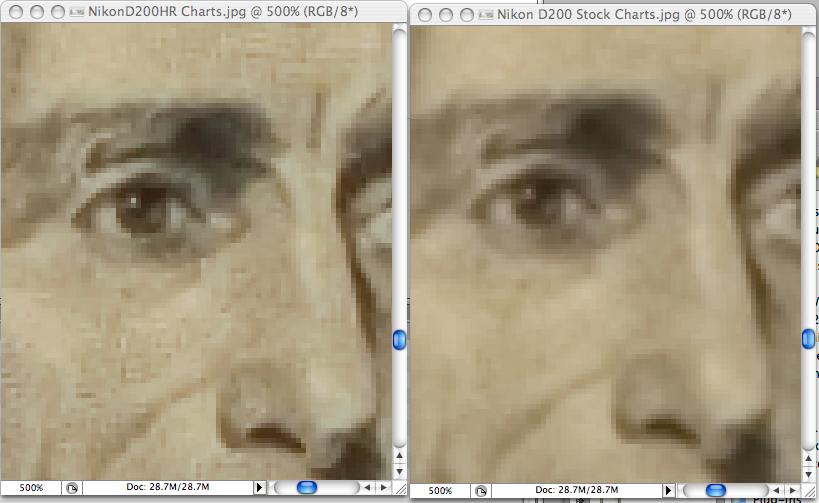 850% zoom. Look at the glint in the eye on the left versus the glint on the right. The glint is only about 1 pixel wide at the sensor. The HR model shows the glint as white and 2 pixels away you have black. Because the right hand stock picture has an AA filter that is blurring the image, not only is the white glint turned to grey but the blacks have lost some of their darkness. This is why a stock camera loses resolution, contrast and color detail. When you blur and image, you are combining surrounding pixels together. This mixing of the image data turns the picture into mush near the pixel level. This is why an HR picture has a certain depth or 3-dimensional quality that a stock camera can't achieve. When you first look at an HR picture, you can be hard pressed to explain why the picture looks so impressive. The reason is that you brain is seeing much more detail and color depth but it is happening at such a small level, that it is hard to pinpoint. 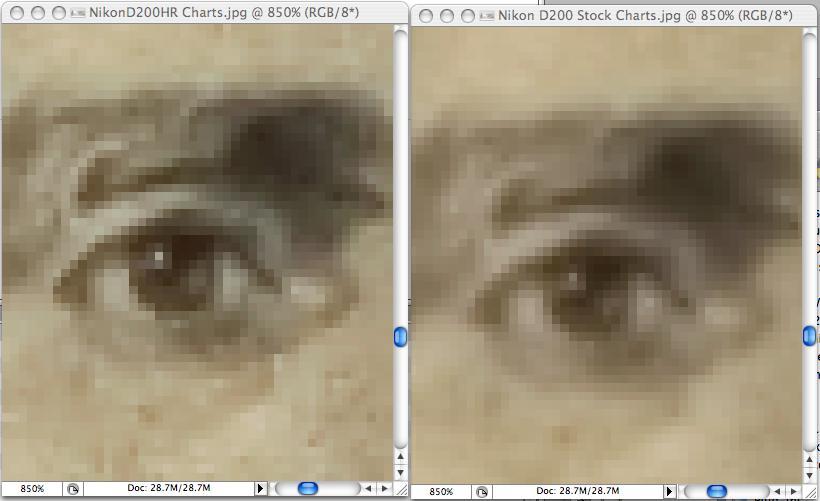 1600% zoom. Look at the differences between the light and dark colors. 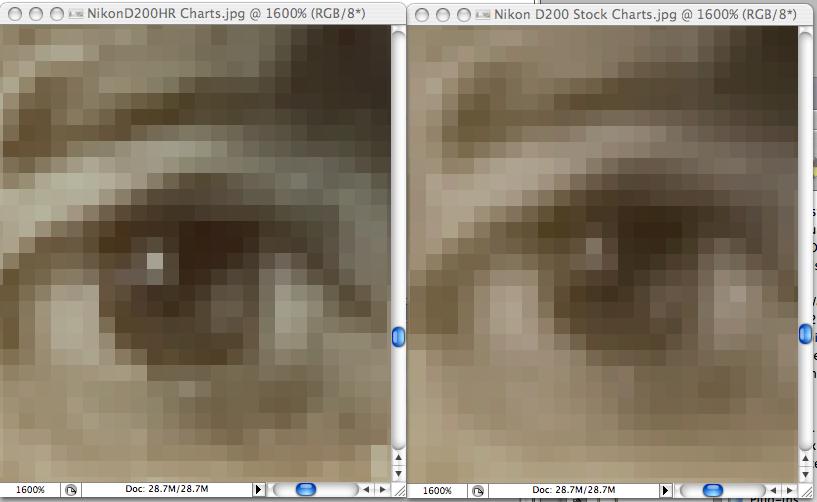 Here is the overall scene of a Hot Rod (HR - Get it?) car interior 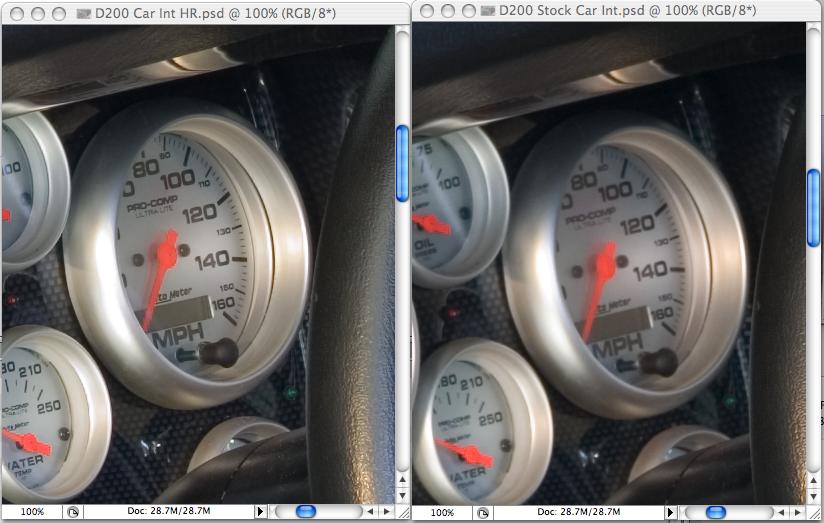 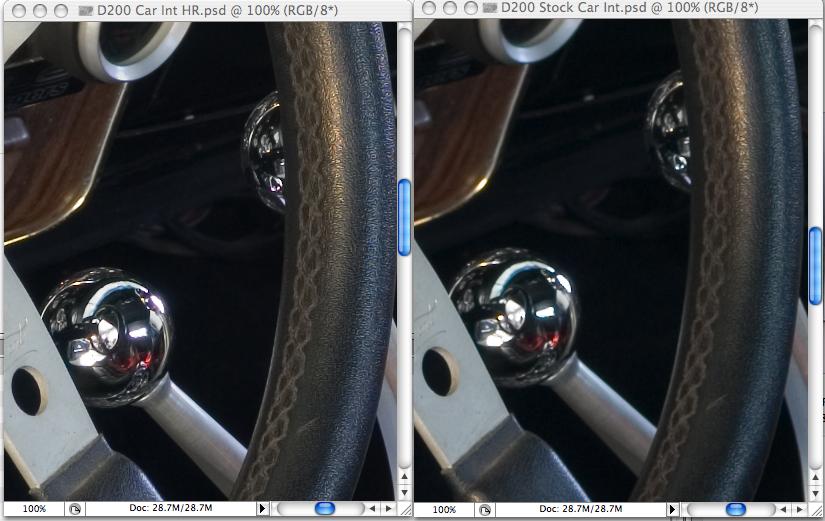 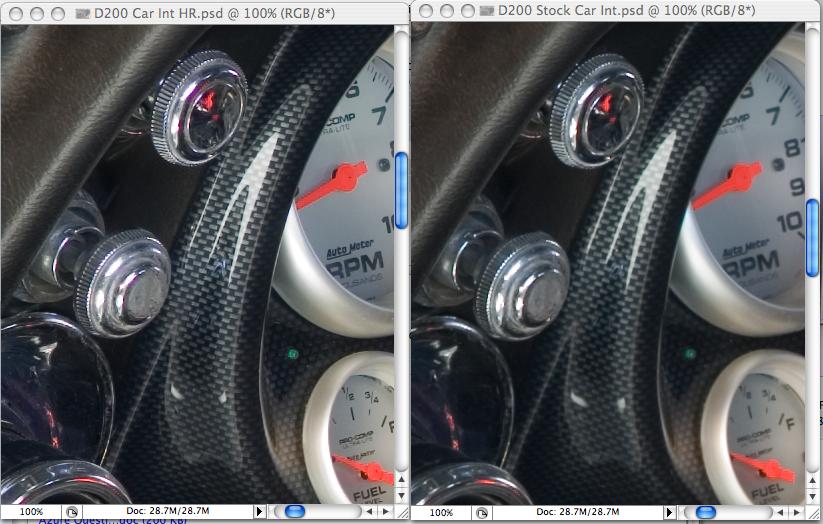 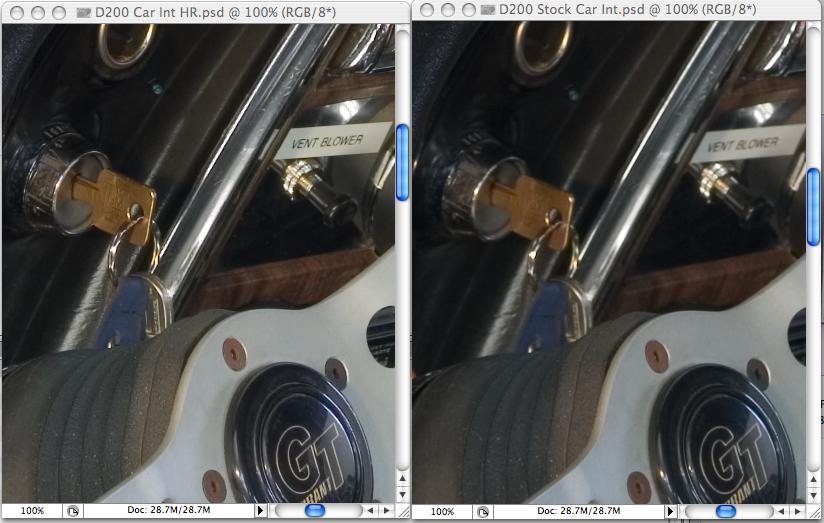 Zooming into the Vent Blower label, we can see a good example of the sharpness difference. 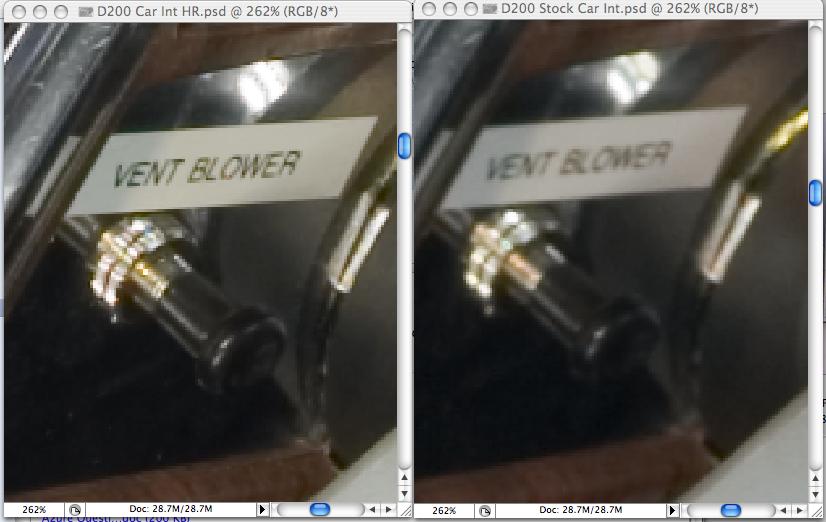 1010% zoom. Notice the difference in the word Vent. Also notice the subtle color differences in the blacks that are lost of the stock camera. 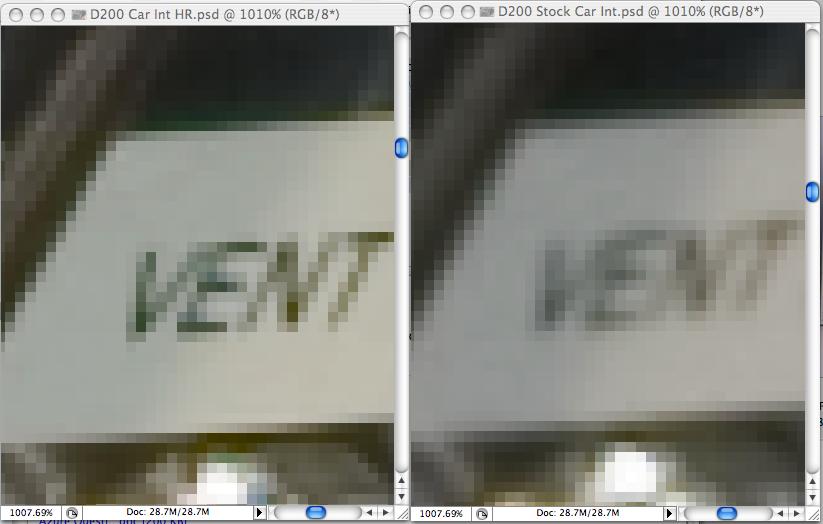 We hope these examples illustrate to you the tradeoff that manufactures have made when they decided to use an AA filter in the camera. While they do achieve a certain technical goal of reducing moiré, they have sacrificed image quality for everything else! Unless you take pictures of resolution test shots, screen doors or certain fabrics with patterns, the AA filter will hurt the quality of your picture. Sometimes, moiré is a real problem. Sometimes the fix is easy and sometime not. However, if you are taking a landscape photograph, you will get a much sharper picture without the AA filter.