The Nikon D850M clearly outperforms the the stock D850 in contrast, resolution, detail and tonality - except that the D850M doesn't do color.  Actually, you can create a color image using red, green and blue filters (like our XNiteBP450, XNiteBP525 and XNiteBP625) to create a super high resolution color picture, but that only works for stationary subjects.

Of course the reason the D850M can do this is that the Color Filter Array (CFA) or Bayer Pattern has been removed from the sensor so that all the pixels see the same light.  With a color camera, only certain pixels can see certain colors.  So if you were to use a blue LED flashlight to illuminate a black and white test chart, only 25% of the pixels on the color camera would see the test chart.  A  45.7 megapixel D850 is turned into a 11.4 megapixel camera (for every four pixels, there is one blue, two green and one red).

We ran some tests using the same lens, same tripod, same lighting, same aperture, same mirror lockup, same timed shooting except for the shutter speed.  On the D850M, we had to use a faster shutter speed because the D850M is more sensitive to light - about 2 stops more sensitive.

One measure of a optical system performance (Camera + Lens + Shooting Conditions) is the Modulation Transfer Function (MTF).  The MTF measures how well the system captures contrast in an image as a function of spatial frequency.  Using the same lens, same aperture, same tripod, same lighting, etc, we measured the MTF of a stock D850 versus a monochrome D850 using 8-bit JPG. If we had used RAW, the difference would be greater.  Amazingly, even at 8-bit JPG, the difference between the two cameras is startling.

Here for the monochrome D850 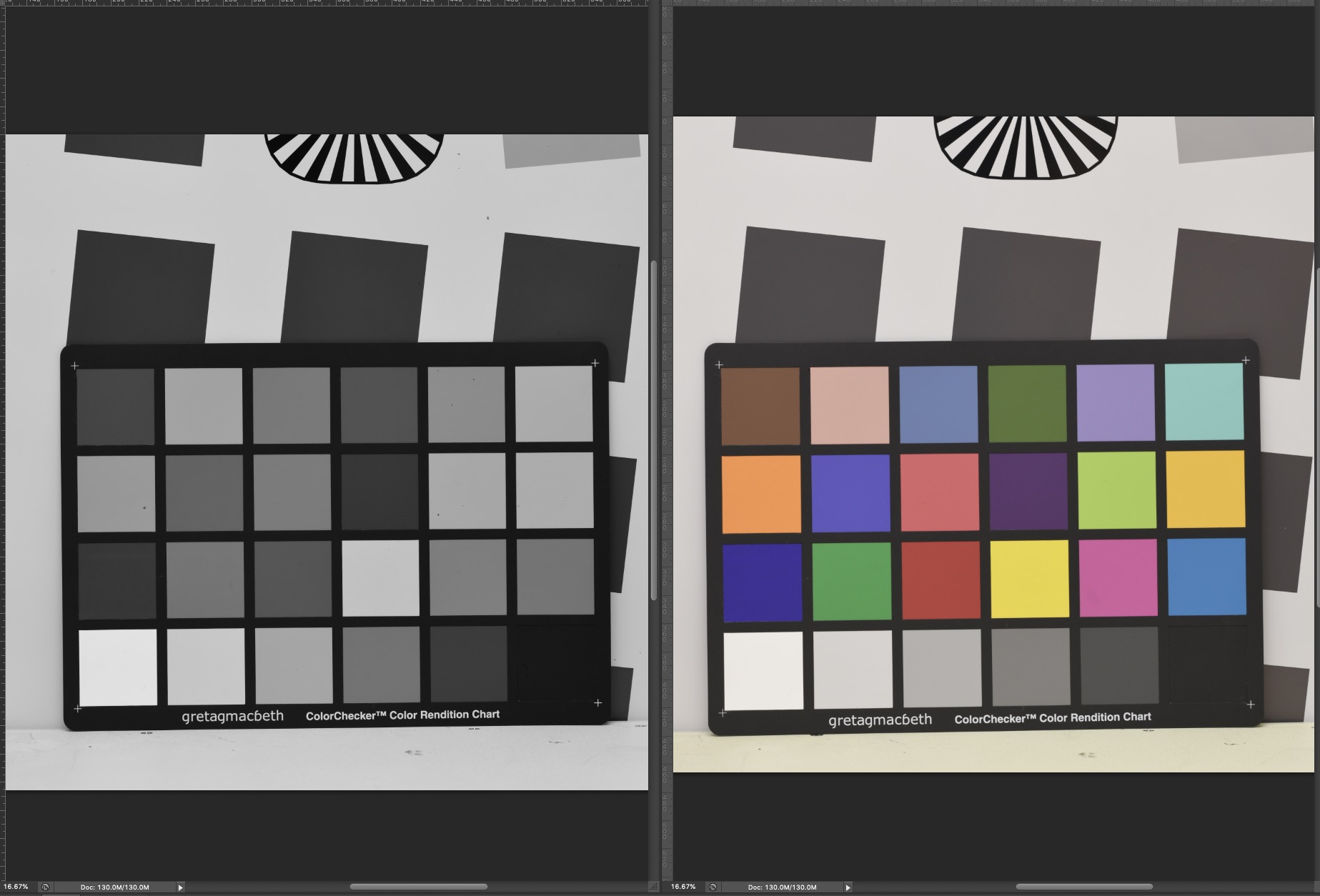 Even shooting a black and white test chart, the monochrome camera has obvious more detail. 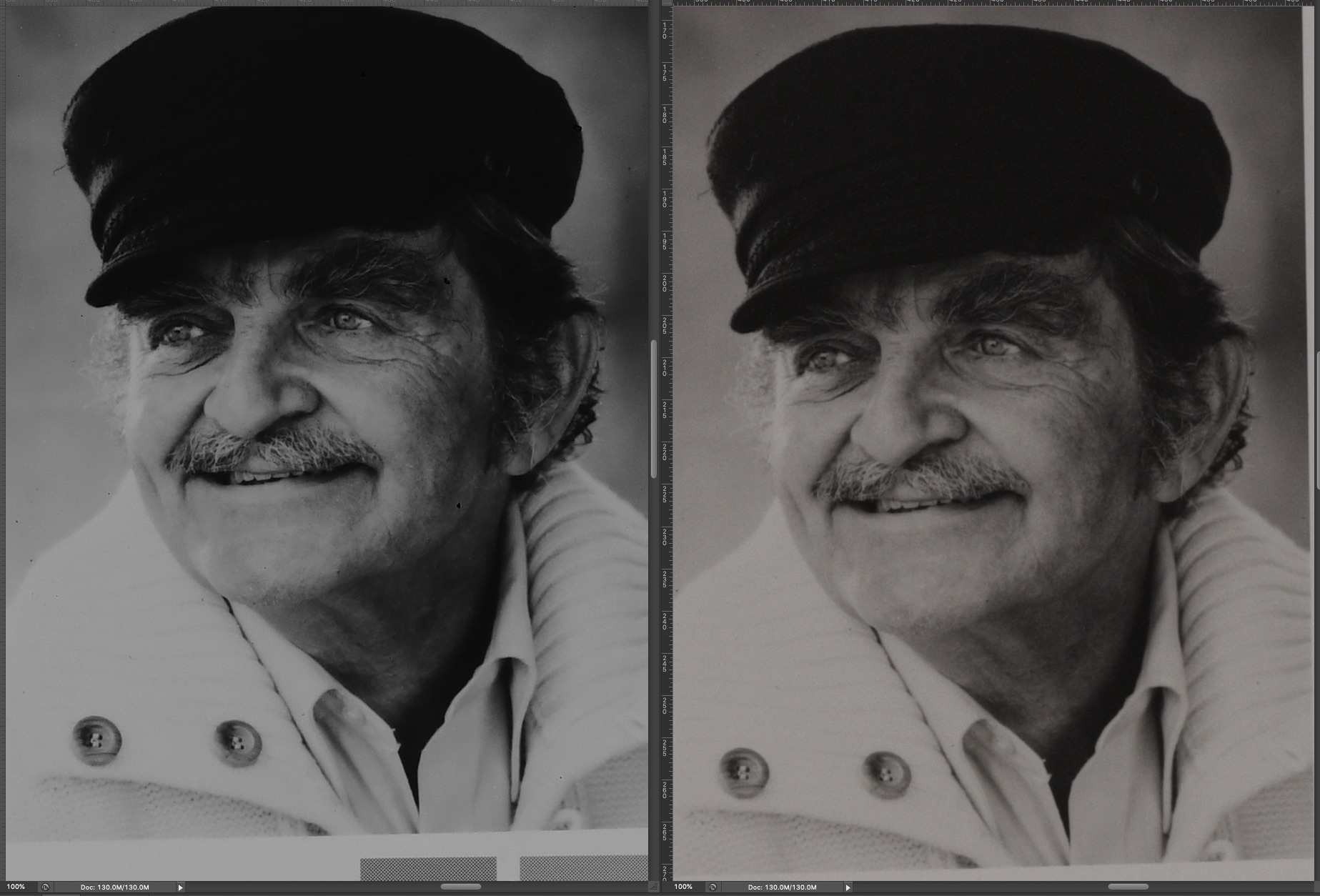 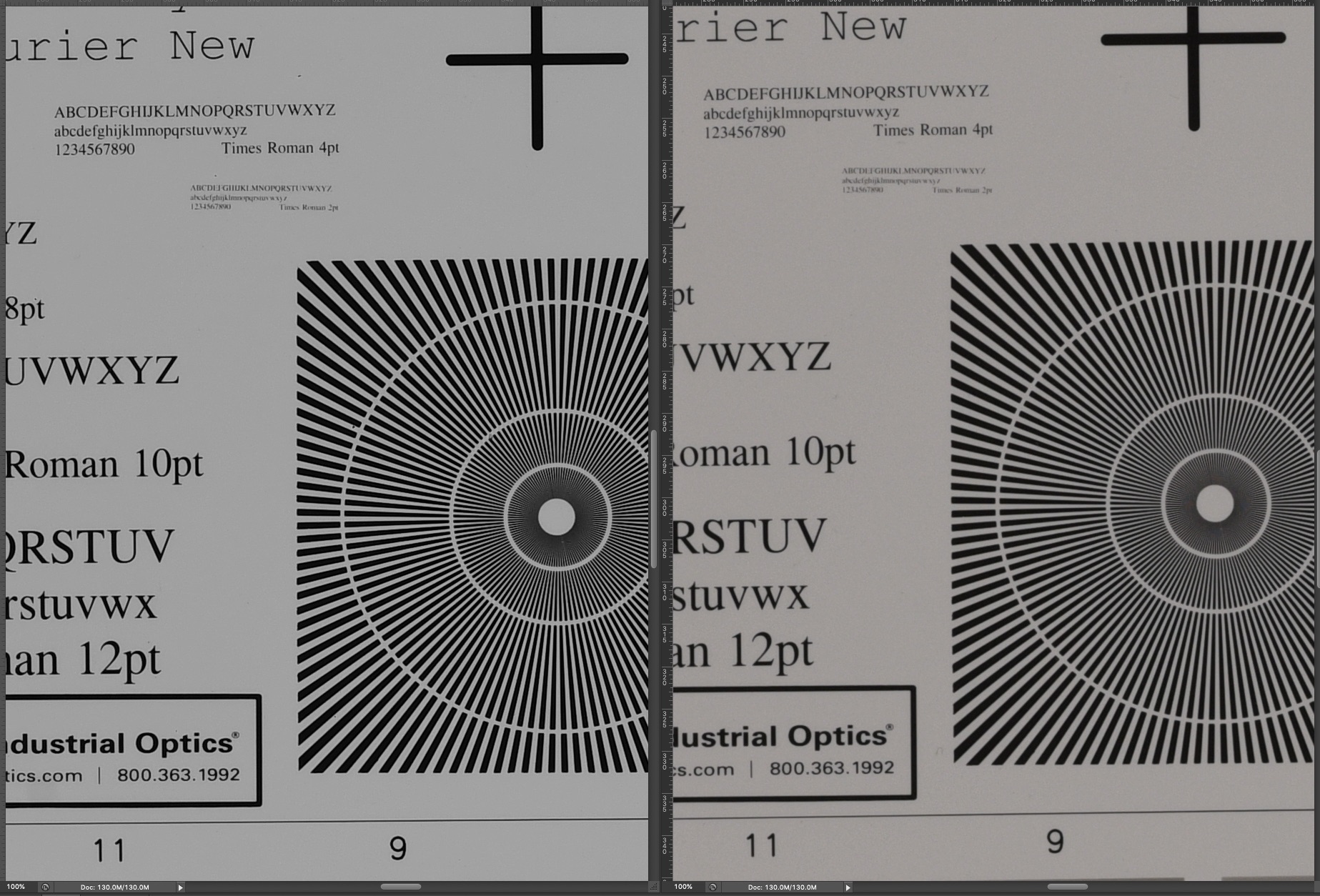 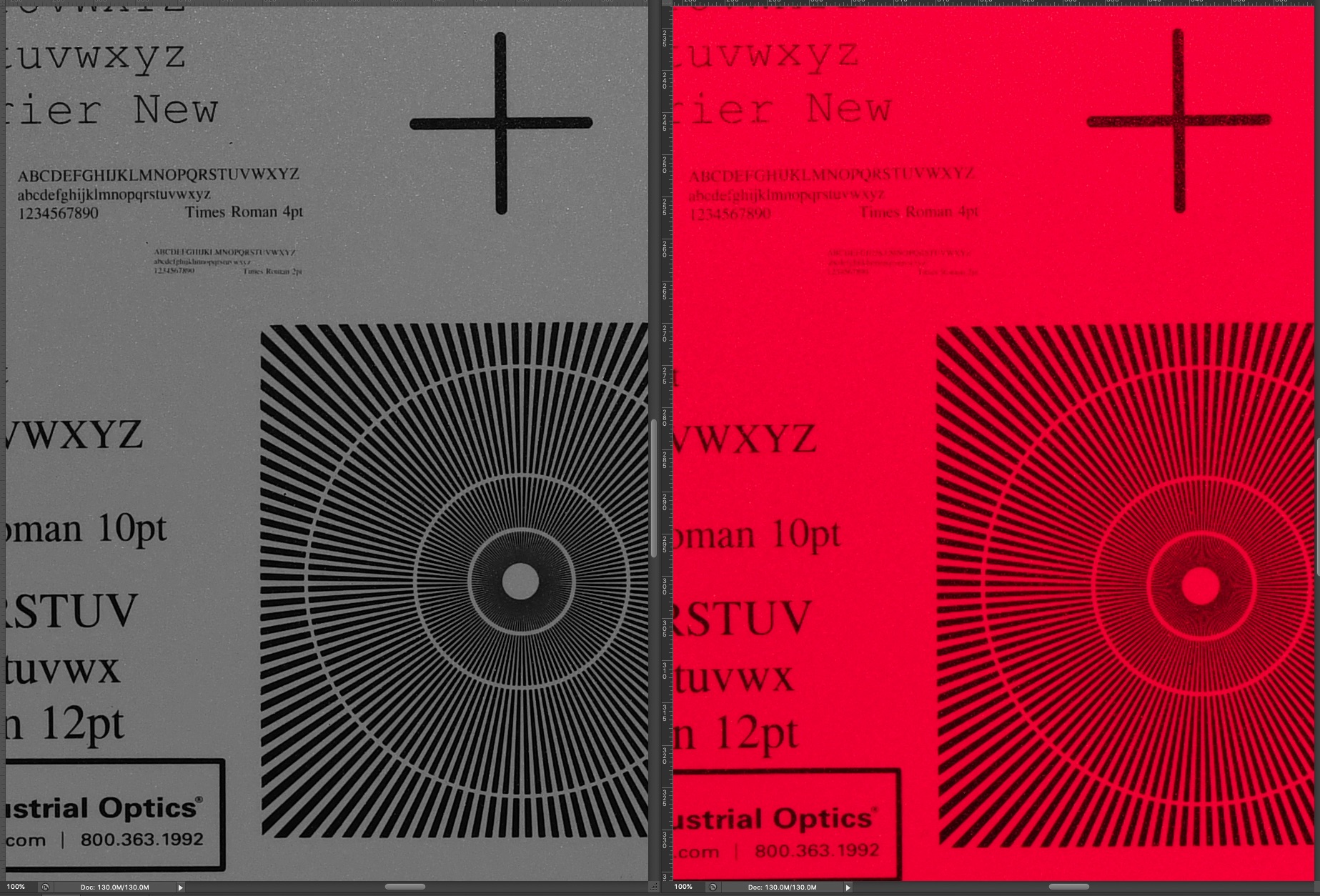 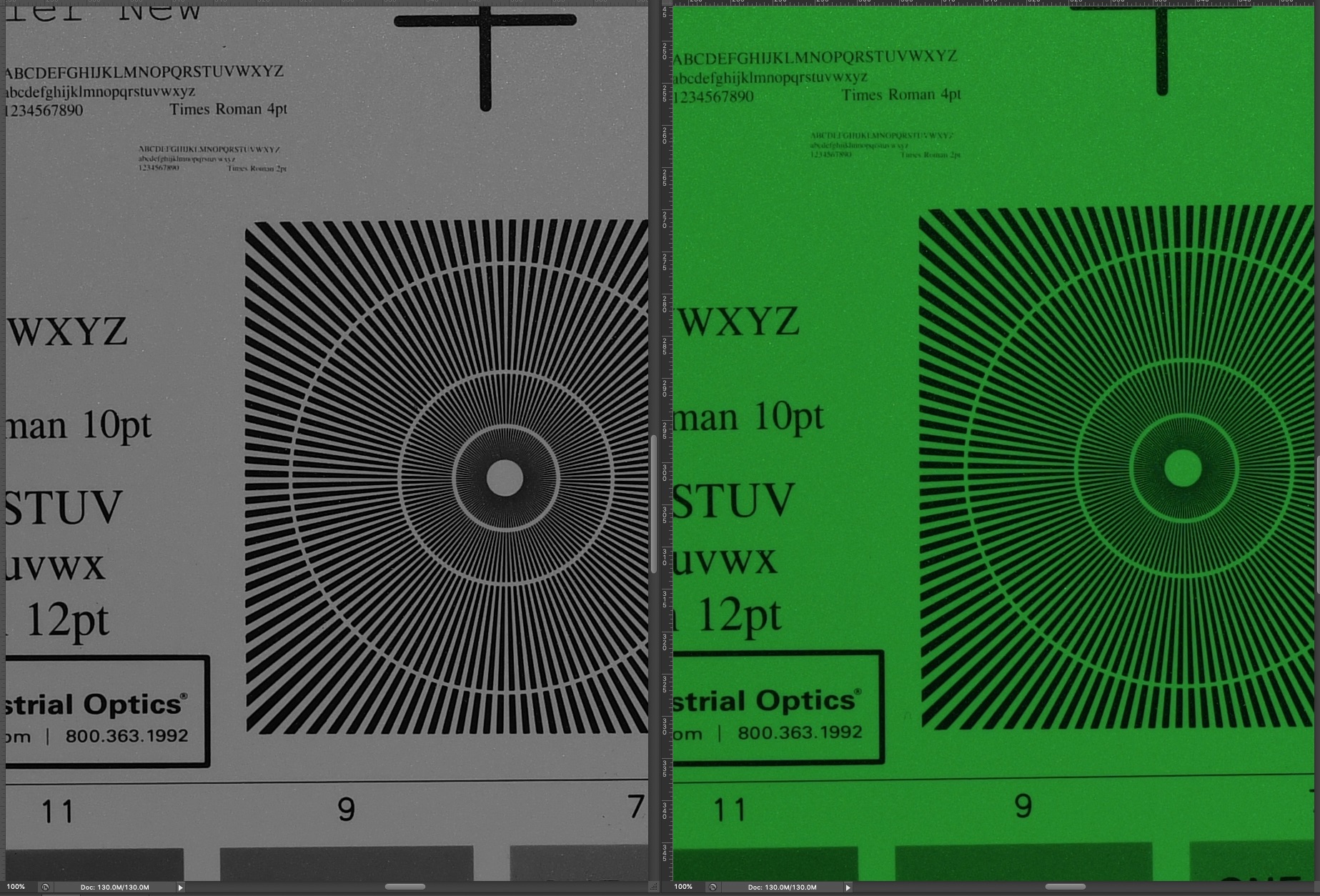 With blue light, the difference is the most dramatic.  The color camera doesn't see blue light as well and the short blue wavelengths can capture more detail than the longer green and red wavelengths. 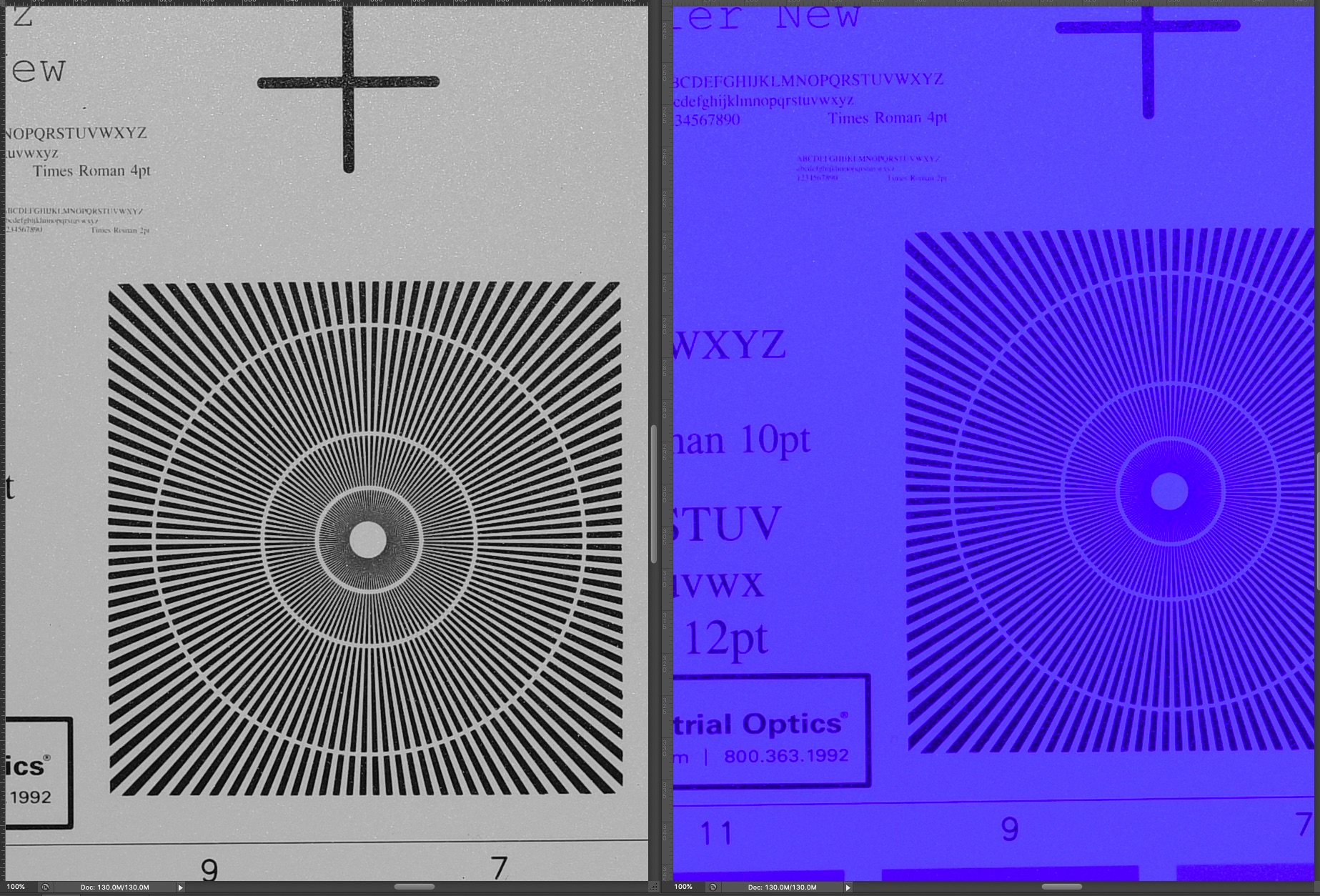